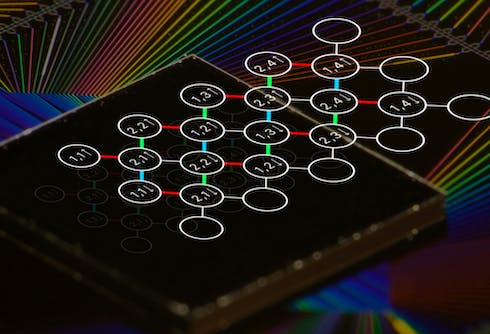 October 11, 2022 – Bristol, England. – Today researchers from Phasecraft, the quantum algorithms company; the University of Bristol; and Google Quantum AI published the results of an ambitious experiment in Nature Communications. The article, “Observing ground-state properties of the Fermi-Hubbard model using a scalable algorithm on a quantum computer,” describes how Phasecraft has taken an important first step towards using quantum computers to determine low-energy properties of strongly-correlated electronic systems that cannot be exactly solved by classical computers.

Modelling quantum systems of this form has significant practical implications, including the design of new materials that could be used in the development of more efficient solar cells and batteries, or even high-temperature superconductors. However, doing so remains beyond the capacity of the world’s most powerful supercomputers. The Fermi-Hubbard model is widely recognised as an excellent benchmark for near-term quantum computers because it is the simplest materials system that includes non-trivial correlations beyond what is captured by classical methods. Approximately producing the lowest-energy (ground) state of the Fermi-Hubbard model enables the user to calculate key physical properties of the model.

In the past, researchers have only succeeded in solving small, highly simplified Fermi-Hubbard instances on a quantum computer. This research shows that much more ambitious results are possible. Leveraging a new, highly efficient algorithm and better error-mitigation techniques, Phasecraft and their research partners successfully ran an experiment that is four times larger – and consists of 10 times more quantum gates – than anything previously reported in the literature. The work was partly funded by the ERC through Prof Ashley Montanaro’s Consolidator Grant “Quantum Algorithms: from Foundations to Applications,” and partly by UKRI through the EPSRC Prosperity Partnership scheme, which enabled the collaboration between the partners.

“The Fermi-Hubbard instance in this experiment represents a crucial step towards solving realistic materials systems using a quantum computer,” says Phasecraft co-founder, and Professor of Quantum Computation at the University of Bristol, Ashley Montanaro. “And we succeeded by developing the first truly scalable algorithm that anyone has managed to implement for the Fermi-Hubbard model. That’s particularly exciting because it suggests that we will be able to scale our methods in order to leverage more powerful quantum computers as the hardware improves.”

Phasecraft brings together many of the world’s leading quantum scientists and engineers and partners with the world’s leading developers of quantum hardware. Their research has led to fundamental breakthroughs in quantum science and is aimed at significantly reducing the timescale for quantum advantage in several critical areas. Beyond developing algorithms that will be able to scale to larger quantum computers, the Phasecraft team is also focused on continuing to build practically relevant features into their models so that they more accurately represent real-world systems.

“We are delighted to see this experiment designed and executed by Phasecraft, representing one of the largest digital fermionic simulations to-date, and also one of the largest variational algorithms to-date, performed on Google's quantum computing hardware,” says Ryan Babbush, Head of Quantum Algorithms at Google AI. “The scalability of their approach derives from being state-of-the-art in terms of both error-mitigation and algorithm compilation for near-term quantum hardware.”

“This experiment represents a new milestone. It tells us what today’s quantum computers are capable of when we apply the best algorithmic technology available,” says Stasja Stanisic, Senior Quantum Engineer at Phasecraft, the paper’s lead author. “We can build on this work to develop better algorithms and better encodings of realistic problems for today's devices.”

Our team brings together many of the world’s leading quantum scientists, including founders Toby Cubitt, Ashley Montanaro and John Morton, and quantum consultant Andrew Childs.

Through our partnerships with Google, IBM, and Rigetti we enjoy unprecedented access to today’s best quantum computers, which provides us with unique opportunities to develop foundational IP, inform the development of next-generation quantum hardware, and accelerate commercialisation of high-value breakthroughs.

We are always looking for talented research scientists and partners interested in joining us on the front lines of quantum computing. To learn more about our scientific research, business partnerships, career opportunities, and fellowships, please visit phasecraft.io.

About the ERC - The European Research Council (ERC), set up by the European Union in 2007, is the premier European funding organisation for excellent frontier research. It funds creative researchers of any nationality and age, to run projects based across Europe. The ERC offers four core grant schemes: Starting Grants, Consolidator Grants, Advanced Grants and Synergy Grants. With its additional Proof of Concept Grant scheme, the ERC helps grantees to bridge the gap between their pioneering research and early phases of its commercialisation. The ERC is led by an independent governing body, the Scientific Council. Since 1 November 2021, Maria Leptin is the new President of the ERC. The overall ERC budget from 2021 to 2027 is more than €16 billion, as part of the Horizon Europe programme, under the responsibility of the European Commissioner for Innovation, Research, Culture, Education and Youth, Mariya Gabriel.

About EPSRC - The Engineering and Physical Sciences Research Council (EPSRC) is the main funding body for engineering and physical sciences research in the UK. We invest in a range of fields from healthcare technologies to structural engineering, manufacturing, mathematics, advanced materials and chemistry. The research we fund provides a platform for future UK prosperity by contributing to a healthy, connected, resilient, productive nation.

The full article in Nature Communications